If your spirit has ever felt burdened, a Mandala workshop may be just what you need to lighten your load and carry on.  Lily Mazurek has created her own method of crafting mandalas especially for spiritual healing.  I sat down with her to learn more about how mandalas open pathways to healing. 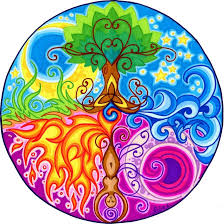 Lily Mazurek holds a master's degree from NYU, which is where she was first exposed to mandalas. One of the textbooks was “Man and His Symbols”, which had Carl Jung discussing mandalas in it. She made a mandala painting of a sliced-open kiwi. This brief introduction was perhaps a seed that would lie dormant until years later when Mazurek was recovering from breast cancer surgery. She came across a video on watercolors that was laden with mandalas. Something about it resonated, and she found that the more mandalas she created with intention, the more she healed. In hindsight, she says mandalas are like that; they show up like a trusted guide when you're going through a major life transition.

While the watercolor video didn't attach any meaning to the mandalas, Mazurek kept making them, but with colored pencil and found she was healing. Her work got people's attention. Eventually, people asking, "Show me," turned into a workshop, which in turn became the Mazurek Method (TM) certification program.

Mandalas have a universal appeal because they show up in nature. Diverse cultures from Tibetan monks to Navajo have used mandalas for healing purposes for centuries. Even Gautama Buddha said that mandalas are a path to enlightenment. Tibetan monks create mandalas out of ground-up semi-precious stones. The stones make the color extraordinarily vivid. Being powdered, the mandalas are temporary. At the end of their ceremony, they carefully sweep the mandala grinds into the nearest body of flowing water, in the belief that sacred nature will deliver the blessings imparted into the mandala to wherever it's needed. 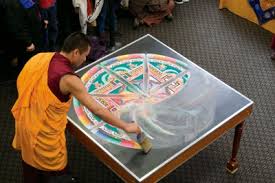 Navajo sand paintings are well known, not all are mandalas, but many are.  The only recording of a healing woman doing the ceremony was at the Ringing Rocks Foundation out west (no longer around). In the recording, Walking Thunder performs a ceremony, which Mazurek shows in her class because it’s very rare to see how it’s done. Interestingly, at the end of that ceremony, all the powders, pollen and herbs are taken outside and scattered.  Different cultures use mandalas for healing purposes.

Gautama Buddha advocated mandala practice as a path to enlightenment.  The word Mandala is Sanskrit, the ancient Indian language. Mazurek's understanding of the meaning of the word is "container of sacred essence."  A lot of cultures have used it in different ways for healing, wholeness, and learning to see the world differently.

While mandalas can be used for emotional, spiritual or physical healing purposes, Mazurek's interactive workshops utilize spiritual techniques, but the results can be financial, physical, emotional or on other facets of life that the student is working on. Participants don't need to have any special skills. It's a plus if anyone does. Skills in creating geometric, cartoony or realistic, symmetrical shapes are a bonus.  Part of the exercises help participants understand their own personal visual language.  There are a lot of different exercises with shape, color and meaning - symbols - so people can discover their own best way of expressing their love or confusion or anxiety or whatever the thought or feeling is, they have more tools to communicate.  Everything leads up to the 2nd half of the workshop during which they can create a healing mandala from scratch. Even if they don’t have any skills, they walk away with some skills.

You don't have to be in Pembroke Pines to participate. Workshops via Skype are coming too! You could be anywhere in the world.

Level 1 is on the art of the mandala, learning how to express with color, shape and symbol using colored pencils. Thoughts and feelings are vibrational.  Participants learn to express problem areas and translate to colors and shapes which they then use to create their mandala from scratch. Mazurek visibly got excited describing a student's enlightened reaction to the workshop. "They start realizing that mandalas are the common denominator in everything.  That usually shifts their perspective on life, sometimes dramatically. I had a girl whose whole outlook on life" shifted when we went outside, "because I always do a fieldtrip exercise, and as we were talking, she got it.  She got the connection and was so blown away. She was so excited at the shift in her perspective. When something like that happens, your personal vibration changes. You’re literally on a slightly higher vibration when that happens," says Mazurek. 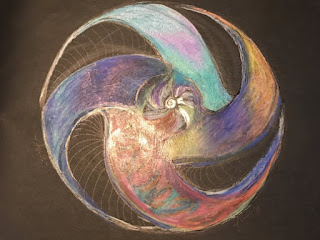 Posted by Mackenzie Littledale - Writer at 7:46 AM

Hello and thank you for leaving your thoughts.